Posted 9 October, 2012 by Lori @ Romancing the Dark Side in Release Day Blitz / 0 Comments

Happy Release Day to Bonnie Bliss on her latest book Halloween Submission! This sexy new release is the perfect way to spice up your reading and I’ve got a teaser excerpt that’s sure to peak your interest, so without further ado… 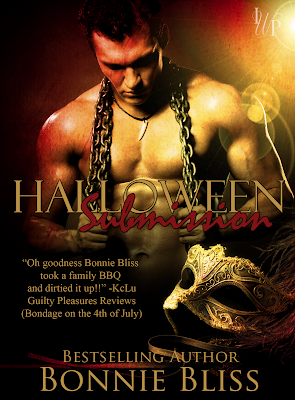 Halloween has arrived and Tom Newton is stressed with his job as a fireman. His best friend Rob, a submissives’ wet dream, is having a play party on Halloween night. Lucy, a nurse who has secretly been crushing on Tom, has decided to go to the party. Tom has decided that he needs to release some tension, and have some fun during his time off. What Lucy and Tom don’t know is that Rob, his best friend, and Millie, Tom’s sister, have set this up. Join them as they enjoy a hot night of bondage play. Can it all run smoothly? Will true love blossom? Will the Master get his slave? There is only one way to find out.

A story packed with sultry moments of Dominance and submission. Halloween Submission promises to be the hottest holiday this year.

An Excerpt from Halloween Submission

“Such a pretty Kitty you are.”

“I have always wanted to spank Catwoman. You’re not focused are you?” He was shaking his head.
Her body shivered. She wanted this, but not with him. She wanted it with the stranger—with Tom. Lucy knew more than anything she could place her fantasy in the arms of this leather clad Adonis.

Robert had been a means to an end all those months ago, a body to suck out the stress and pain through his Sadistic edge.

“On your knees! Crawl to the bench, you know which one, don’t look at me that way.”

She averted her gaze. Her head dropped in respect. The new focus of her attention—it went right to the man at the door. He had gotten closer though, having actually stepped into the room. The heat of his gaze penetrated her to the very core and shot straight to her pussy. The walls of her vagina clenched. Lucy sucked in a deep breath as warm fingers pressed against her chin and lifted her head. Looking at Robert felt wrong somehow. She kept her thoughts on the mystery man in black. It was him. He gave her the mind set to put Tom in Robert’s place.

“On the bench, Kitty. You know the drill.”

She did. God, did she know the drill. Every hair on her body felt lifted. Her heart pounded and she started to tingle from head to toe. Even her scalp took on the effect. Nipples puckered in the tight confines of the corset; hidden to the riveted gaze of the stranger watching her. This was her test. To show him how beautiful her submission was. That was all she needed now to wash away the stress and exhaustion from the long shift at the hospital. She wanted it so bad to be Tom, but she settled for the fantasy as she laid her body across the padded branch. Her breasts, if they were free, would be dangling off either side. Robert didn’t bind her. The man knew how to keep a woman bound with the power of his authority and his voice.

In her line of vision came a beautiful paddle. It was thick dark wood, oiled to shine. On one side the word naughty was etched. That was for moments with one good swat; a reminder spanking. This was something else entirely. It was a show, a game. Robert knew, she knew, and the man watching knew this was all for him. Lucy definitely wiggled her ass, still covered in sheer lace.

She could feel his smile as Robert rubbed his suddenly scalding palm against her buttock.

“Such a pretty Kitty you are.”

The hand was gone. Pulses sounded off loud in her ear. It seemed like hours before the shot of pain vibrated through her flesh, exploding out of her in a moan that came out as it was supposed to.

Sweet euphoric bliss settled into the heat that now simmered in her ass cheeks. Two and three came quickly, to the top of her thighs. The sting mixed with dull pain made her whimper out the count. The fourth came to a lower spot on her left thigh. Her fingers started to curl up. Her toes were like shriveled things in her high heels. The man was watching. He was now standing in front of her, a few steps away, causing an orgasm to rise to the surface as if she would boil over. 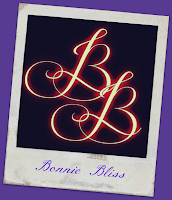 Bonnie Bliss is not just a willing submissive, but she is a wife and a mother. By day, she is a busy, stay at home mother. At night, she is a sultry storyteller. Her tastes go towards the dark and the extreme. She loves to twist up fairy tales and sweet stories we all know and love. Her lust for Dominance and submission has taken her into the dark inner workings of Sadomasochism.

Bonnie is a native of Southern California, and says that everything in the Katy Perry song, California Girls is totally accurate. She has done everything from waitressing, customer service phone rep., Corporate Real Estate, and spent a pretty impressive part of her life working for the Disney Corporation—including as a Disney Princess. When she’s not writing, she is ordering too many custom bows for her daughter, baking the best cupcakes in the world, going to Disneyland, laying on a beach, and sometimes playing hockey for release.