Posted 22 October, 2012 by Lori @ Romancing the Dark Side in Giveaways, Guest Posts / 14 Comments

I’m really excited to have author Regan Summers joining us today talk about her new release, Running in the Dark. If you like an action packed urban fantasy with vampires and a kick butt heroine, be sure to add her books to your list. Read on for a teaser excerpt and an awesome giveaway, courtesy of Ms. Summers!

About the Characters… By Regan Summers

Thank you so much for hosting me, Lori. I’m so pleased to be here!

Malcolm Kelly would make a fantastic boyfriend. If he wasn’t busy reinforcing a tense alliance between the vampires and humans of Chile. And if he could go outside in daylight. And if he didn’t have a world of secrets.

In Don’t Bite the Messenger, Sydney Kildare was entering her late twenties. That’s old for a courier, a human who runs messages between technology-blighting vampires. Her goal was to retire, to move somewhere where the undead didn’t meddle and enjoy her hard-earned cash.

I won’t spoil that story, but I will say that her carefully-laid plans more or less exploded. In Running in the Dark, Syd’s hiding out in Chile with her rescuer slash well-dressed vampire around town slash boyfriend Malcolm Kelly.

Despite it being yet another vampire territory, the situation would be pretty ideal, if only Mal’s “skill” in the kitchen was the worst of his secrets.

An Excerpt from Running in the Dark

“I tried to keep this warm but the stove died. A couple of times.” Malcolm set a skillet on the counter, then we both watched as he peeled his hand off the handle.

“I’d call that pretty damn warm.” I scrunched my nose up as he flexed his hand, his mouth tight. “Not into oven mitts?”

“They don’t go with these pants.” Pants which probably cost a thousand dollars, and clung to his hips and stretched across his thighs just so. His eyebrows rose when he caught me watching him. Busted. “It’s paella. You liked that, didn’t you?”

He turned back to the pan and I pressed my fingers against my mouth to keep from making a cutesy awwww sound. Vampires didn’t care about food, and they certainly didn’t cook for humans. Yet here he was, cooking and—he pulled a bowl down from a shelf—serving me dinner. I’d take that over a thousand Mercedeses, except for maybe a vintage 300 SL.

He presented me with a bright pile of rice, shrimp and vegetables in a small, ovoid bowl.

This wasn’t my first boyfriend, drinking canned beer at a kitchen table littered with pizza boxes, scales and baggies. It wasn’t me, just a year before, eating takeout while standing at my sink with my boots still on. No. I was sitting in the cozy bottom of an urban mansion while a shirtless, hot man fed me gourmet food he’d made himself. Any second the stainless-steel fridge was going to open up, revealing a choir of angels.

Malcolm stepped between my knees and raised a fork, and I would have pinched myself, but I didn’t want to wake up.

“Open.” He grinned, his one dimple flashing.

I took a bite, then froze. Paella was savory. Complex. Edible. My tongue suggested that the faster I get rid of whatever was in my mouth, the better. I made a low, panicked noise as my gag reflex agreed with my tongue. Malcolm’s smile widened before disappearing abruptly.

I chewed twice. The rice crunched between my teeth, and my eyes watered as cayenne and black pepper filled my head with heat. Awful, unwelcome, somehow bitter heat. I choked it down, then spilled wine from the corners of my mouth as I drank as fast as I could.

“Is it bad?” He looked back and forth between the pan and the bowl.

“I think the stove committed suicide because it didn’t want to be party to that…that…abomination.” I pushed him back and hopped off the counter, heading straight for the decanter breathing on the far side of the kitchen. While I wanted to drink directly from it, I managed to pour a little wine before I downed that.

“I thought you liked paella.”

He shrugged, staring at the bowl. “It seemed right.”

“Seemed?” I started laughing as tears squirted from my eyes. “I’m just going to throw this out there.” I gestured back and forth between us, which Malcolm took as an invitation to move toward me. “We, our two kinds, might have slightly different palates.”

I turned my head away, play-pushing at him as he leaned down. “No. Don’t kiss me. I wouldn’t wish this taste on my worst enemy.”

His face lit with mischief. “I will kiss you, and you will like it.”

He dipped his head until his lips met my neck, followed by his clever tongue. My hands shot into his hair and one leg wound around his, pulling him against me. I did like it and, judging by the prominence of his reaction, so did he. Maybe bad paella sex was the undiscovered successor to make-up sex. 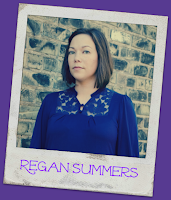 Regan Summers lives in Anchorage, Alaska with her husband and alien-monkey hybrid of a child. She can suspend disbelief in the space of a heartbeat, is prone to breaking an uncomfortable silence with a less comfortable statement, and believes that hard work leads to happiness.

Don’t Bite the Messenger is available now wherever e-books are sold. Running in the Dark is available for pre-order and will release on October 29, 2012. 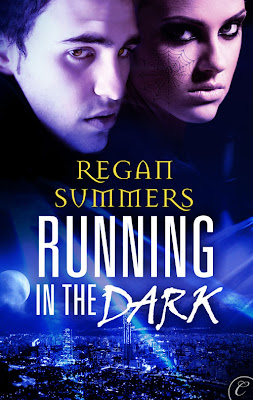 After surviving a vampire turf war in Alaska, vampire courier Sydney Kildare is back behind the wheel and working under an assumed name in Chile. She doesn’t speak the language, doesn’t know the city and—worst of all—has to drive a crappy car.

What she does have is Malcolm Kelly, her sort-of boyfriend and manager of the city’s vampire population. But with Malcolm preoccupied by bloodsucker business—and a gorgeous vampiress from his past—Sydney feels more alone than ever.

But Sydney has more than her love life to worry about. She’s got vamps on her tail, mysterious deliveries that leave death in their wake, and old enemies targeting her to get to Malcolm. Turns out he’s got a history more deadly than she ever imagined, and she’ll have to use every skill in her arsenal to stay alive…

14 Responses to “Romancing Guest Post: Regan Summers and win RUNNING IN THE DARK”