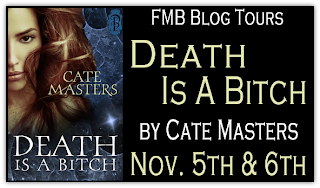 I’m happy to welcome author Cate Masters who’s stopping by on her Death is a Bitch blog tour via FMB Blog Tours. If you love a strong leading lady and angels and demons be sure to add this one to your list, you won’t be disappointed (I’ll be sharing my thoughts on it soon!). I have a teaser excerpt and an enticing giveaway to share with you today…

An Excerpt from Death is a Bitch

Death stepped from the shadowy curtain of night along a deserted stretch of road toward the mangled hunk of cherry-red metal that used to be a sweet Z240 sports car. Stardust glinted in the black hair that dipped to her waist.

She kept a safe distance from the wreck. Inside, a thirtyish man slumped behind the wheel, the air bag deflating away from his near-lifeless body. Blood oozed from a nasty gash to his head. Should have worn his seat belt. Too late for life lessons, though. Those weren’t her expertise anyway. Just the opposite.

Leaves crackled in the underbrush beyond the nearby trees. Death gripped the silver charm bracelet on her wrist, her senses on high alert. Her finger poised near the hidden latch, ready to release a stream of lightning.

A deer. It stilled, its wide eyes fixed on her.

Seeing nothing else, she continued with a modicum of caution. Taking souls didn’t exactly make her popular, and after so many millennia, she should’ve been used to it. The bad jokes. The Halloween parodies. A scythe? Please. She’d never used cheap props. Only the finest weaponry. No mortal ever suspected the intricately designed baubles adorning her bracelet were anything more than ornamental.

Moonlight gleamed off the curves of the sports car, and she ran a gilded nail along its hood. She wouldn’t mind taking one of these babies for a spin. In its former condition, of course, before this guy took the curve too fast and wrapped it around a tree. Humans always rushed everywhere, sometimes straight into her arms.

The man’s moan signaled she had no need for weapons. This one would give her no trouble. She fingered his blond hair, matted with blood. What a shame. So young, and so handsome. He’d leave at least one lover grieving, no doubt.

His eyes fluttered open. When he looked up, recognition intensified the flicker of life in his eyes.

She needed no introduction. They always knew her, unmistakable in the glimmering black filament gown, its folds revealing a glimpse into infinity.

The stilettos usually earned a second glance, the four-inch heels glistening like fool’s gold. The butterfly tattoo spanning her upper arm likewise drew curious looks, which inevitably changed to horror when the souls recognized the face imprinted within that colorful ink: their own. 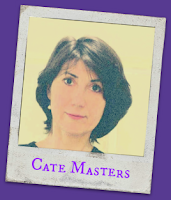 Cate Masters has made beautiful central Pennsylvania her home, but she’ll always be a Jersey girl at heart. When not spending time with her dear hubby, she can be found in her lair, concocting a magical brew of contemporary, historical, and fantasy/paranormal stories with her cat Chairman Maiow and dog Lily as company. Look for her at http://catemasters.blogspot.com, and in strange nooks and far-flung corners of the web. Cate loves to hear from readers. Email her at: cate.masters@gmail.com

One ecopy of Death is a Bitch by Cate Masters 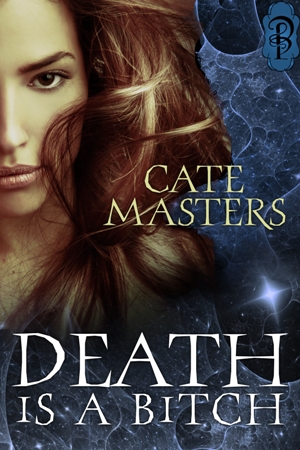 About the book…
Eternity can suck when it’s all work, work, work. Death harvests souls even when they stack up faster than pancakes in an all-you-can-eat-buffet. No wonder she can’t shed the Grim Reaper rep.
As the patron angel of death and dying, Azrael works closely with Death but is dying for true intimacy. She’s the only immortal who’s ever aroused such powerful emotions in him. One taste of her leaves him needing her like humans need air and food, but will a demon’s lies leave a bad taste?
No one escapes Death – except King Sisyphus. Twice. With the help of Damien the demon, Sisyphus tries again, and she’s determined to have justice. Some say Death’s a bitch, but only when she has to be. But will the price of justice be a broken heart?
Enter via widget below

One Response to “Blog Tour: Death is a Bitch by Cate Masters {Excerpt & Giveaway}”