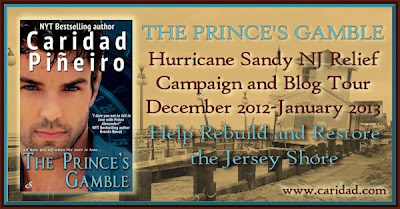 Welcome to my stop on Caridad Piñeiro’s Hurricane Sandy NJ Relief Campaign and Blog Tour. Being a native New Yorker (yes, I’m a Brooklyn girl!) I was a witness to the devastation and destruction left by hurricane Sandy on the tri-state area, especially in the state of New Jersey. When I learned Caridad was putting together a tour for this worthy cause, I jumped at the chance to help her spread the word.

One hundred percent 100% of the proceeds of her latest release, The Prince’s Gamble will be donated to the Hurricane Sandy NJ Relief Fund from now until March, more information is available at the end of this post. Please help any way you can, whether you purchase the book or spread the word on social media, every little bit helps. Thank you all in advance! I’ll now hand things over to the fabulous Caridad…

I knew that my dark side wanted to take over many years ago while I was writing contemporary romances. No matter what, something was always pushing me to write about something edgier and with more action and suspense.

THE CALLING vampire novel series was born from that darkness and I’m happy to say it’s back with KISSED BY A VAMPIRE (Oct 2013) and more books in 2013 from Entangled Publishing under the new series name – THE REBORN vampire novels.

But a funny thing happened along that walk to the dark side:  I realized that humans were sometimes scarier than the monsters I was writing about.

That human darkness prompted me to explore writing straight suspense stories and I’m here to chat with you today about my latest romantic suspense release, THE PRINCE’S GAMBLE.

I got the idea for the story during a visit to Las Vegas with friends. As we went from one casino to another and enjoyed all the fun to be had (while also spending lots of time writing), I knew that behind the scenes there was a lot that was not so nice. Prostitution. Drugs. Money laundering that feeds so many criminal activities, even terrorism.

That’s when the idea for THE PRINCE’S GAMBLE was born, but being a Jersey Girl, I decided to set the story in Atlantic City, especially since I wanted the prince to be building a totally over-the-top themed luxury hotel like none other along the boardwalk!

Behind the glitter of Prince Alexander’s casino is the possibility of money laundering and a white slavery ring being run by the Russian mob. Those dark elements risk his dream of freedom and success and the prince is not about to let anyone stop him. Not the mob or the bossy and demanding FBI Agent sent to investigate the case.

It was a lot of fun to put together the very sexy and caring prince with kick-ass Agent Kathleen Martinez. Especially since she has a history with his family and is not sure she can trust him. The sparks definitely fly as these two determined people fight and then unite to solve the mystery surrounding the dangerous activities at the casino.

I hope you will take the time to check out THE PRINCE’S GAMBLE.  NY Times Bestseller Brenda Novak said, “I dare you not to fall in love Prince Alexander.”  I dare you, too! 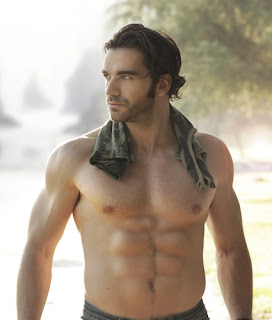 Thanks to Romancing the Dark Side for letting me visit today.  Also, please take a moment to find out more about my campaign to help raise money for the Hurricane Sandy NJ Relief Fund.

Best-selling author Caridad Pineiro is helping to rebuild the shore by donating proceeds of her latest romantic suspense release, THE PRINCE’S GAMBLE, from now until March 1, 2013. Caridad’s share of the proceeds from the sales of the book will be donated to the Hurricane Sandy New Jersey Relief fund. THE PRINCE’S GAMBLE is available for download at Amazon via this link: http://amzn.to/UFCKRO or at B&N via this link: http://bit.ly/WxipEv.

Please help spread the word by tweeting this to your friends:

Thank you so much for your support! 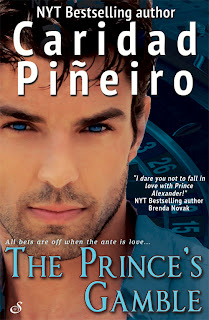 Prince Alexander Ivanov is scrambling to save his reputation and his livelihood. One of the Russian Nights Casino’s hostesses has disappeared, and his business is suddenly under investigation by the FBI for associations with the mob and money laundering.

Special Agent Kathleen Martinez has no patience with rich, entitled aristocrats, especially one like Alexander Ivanov whom she believes is involved in the vicious human trafficking ring which she’d tried—and failed—to shut down two years earlier. With a second chance to bring him to justice, she goes undercover in the casino, but instead of facing the villain she expected, she finds herself battling a sizzling attraction to the man.

Now, forced to work together to trace the source of the illegal activities, the danger—and the passion between them—grows out of control, and they slowly begin to realize the biggest danger isn’t to the casino; it’s to their lives…and to their hearts.