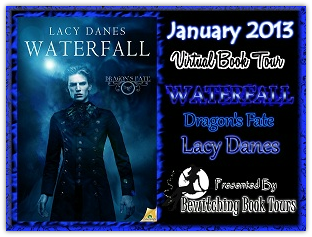 Welcome to my stop on the WATERFALL Virtual Book Tour. Author Lacy Danes has stopped by to share her new paranormal romance featuring elemental dragons, her favorite paranormal movies and has an awesome tour-wide giveaway!

Hello and thank you so much for having me on Romancing the Dark Side.

I have always been drawn to paranormal and fantasy. When I was kid all the neighboring kids would all get together and play dungeons and dragons. In my teens I read Steven King, Anne Rice and Judy Blume. In my twenties I moved to historical and contemporary romance. But I always loved intense paranormal and dark movies. I even like most horror movies. The first one I saw was Nightmare on Elm Street when I was 13. It scared the crap out of me and I loved it. Grin. I do have my favorite paranormal movies that I watch over and over.

Some of my favorites are:

Underworld: Vampires against Lycans.  How wonderful is that?

From Hell: A clairvoyant with a DARK feel, ancient orders and history.

Constantine: I Love Constantine. The Graphic novels are good too. Good against evil. Heaven and Hell.

30 Days of Night: Vampire’s in Alaska. Someone should have thought of that one sooner.

A recent movie out that I enjoyed was Red Riding Hood.

What are some of your favorite dark or paranormal movies? 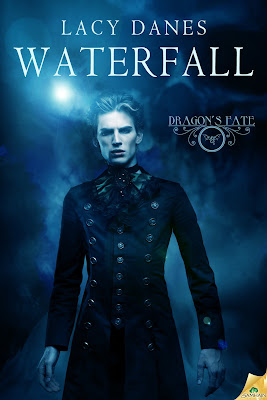 Curses are designed to be cruel, but the one afflicting Jordan and his brothers is almost beyond bearing. A dragon born by blood magic, he is an immortal trapped in human form, with only one hope of finding his eternal mate. He must bite her—and pray she lives.

One dark night, he senses the wounded heartbeat of a woman in the shadows, begging him to end her life. Ever the gentleman, he chivalrously obliges her wish. Only to discover three days later that she lives. And has married another.

Celeste always dreamed of marrying for love, but the nightmare of living in her father’s home drives her to wed the Duke of Hudson. Yet on her wedding eve, she is compelled to follow a mysterious man who professes to know her secret. A man with curious blue scales on his muscular arms—whose shadowed eyes reflect a dangerous mix of destiny and desire…

Warning: This novel contains explicit sex, sex in water, four super-hot dragon brothers, and a curse born from magical power that has left them wondering who they are all their lives. 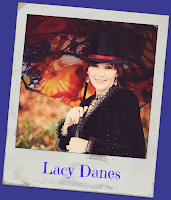 Lacy Danes made a New Year’s resolution to write a hot, historical romance. A year and a half later, she achieved her goal.

She lives in Portland, Oregon, where besides writing she enjoys playing cards, chasing her kids around, and savoring a great martini with the man of her dreams all while watching the world go by.