Happy Friday! Who’s joining the blogoversary celebration today? It’s the awesome Stacey Kennedy! I love reading the sexy alphas and kick ass heroines she writes…and I must confess her latest hero, Kyden, is beyond swoon-worthy, but I digress. Stacey’s here to give us the inside scoop on the heroine of Werewolves Be Damned, the bold and daring Nexi Jones…let’s get started 😉

Character Profile: Meet Nexi Jones
Stacey Kennedy’s an urban fantasy lover at heart, but she also enjoys losing herself in dark and sensual worlds. She lives in southwestern Ontario with her husband, who gave her a happily-ever-after. Together, they have two small children who can always make her smile, and who will never be allowed to read Mommy’s books. If she’s not plugging away at a new story, you’ll find her camping, curling up with the latest flick, or obsessing over Sons of Anarchy andGame of Thrones. 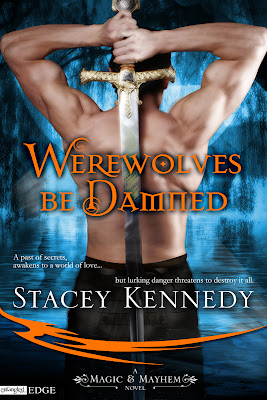 In her newest release, WEREWOLVES BE DAMNED, we are introduced to a whole smorgasbord of supernatural characters from the Otherworld, but today, Stacey’s here to chat about the heroine in the Magic & Mayhem series.

1. Where is your character from?

She’s originally from the Otherworld, but a power-hungry vampire killed her mother when she was only a few months old. You see, the magic a witch holds in her blood can transfer to a vampire if he drinks from her. So, in wanting a safer life for her, (a peaceful one, far from danger), her father blocked her magic, which turned her into a mortal. Then he placed her with two parents (humans) in the Earthworld looking to adopt, which were Frank and Gloria Jones. She lived in Carson City, Nevada.

2. How old is your character?

She’s twenty-five years old. Of course, now that she has returned to the Otherworld and her block on her powers has been lifted, she will only age until she’s thirty-years old. Once she reaches thirty-years old, her immortality will settle in, and she’ll be thirty forever. Lucky, girl, right?!

3. What is your character called?

Her name is Nexi Jones, but Kyden, the hero in WEREWOLVES BE DAMNED, calls her, Álainn, which is Gaelic for “beautiful”. 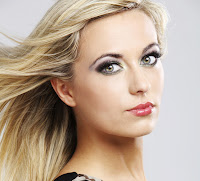 Nexi’s 5’5, and has a slim build. She has long, dirty-blonde hair, hazel eyes, with light freckles dusting
her nose. She’s pretty, but not too fancy. She likes her jeans and her comfy clothes. Well, that is, before she puts on her guardian gear. Now her leather kilt and matching bra is her preferred attire.

5. What kind of childhood did she have?

Nexi had a very typical childhood. She did normal things like read under a tree on a sunny day, work in the garden with her mother, and hang out with her friends. All very normal things…until one traumatic night, where she learns the truth about her real heritage of being part guardian, part witch, which is the beginning of WEREWOLVES BE DAMNED.

6. What does your character do for a living?

By the end of the story, Nexi is a guardian/witch in the Otherworld. Meaning, she is part of the Council’s Guard, who defend mortal lives. Basically, she has a cool magic sword, and whenever a supernatural takes an innocent life, she kicks some serious ass!

7. How does your character deal with conflict and change?

She doesn’t deal with it well. WEREWOLVES BE DAMNED is Nexi fighting her way through a traumatic event, as in watching the murder of her parents. She’s on edge, she’s defensive, and she’s had her world ripped out from underneath her.

To sum it up, Nexi is having a hard time trusting anyone. She’s mad at the world. She’s battling against those she should trust, and she’s a mess on the inside, fighting through her despair and grief. Instead of breaking down and sobbing in utter horror, she takes the angry route of dealing with grief, and she’ll stop at nothing until she avenges her parents.

8. Does your character have a romantic interest in anyone?

Oh, yes, she has elite guardian, Kyden. He’s all very sexy and incredibly kick-ass himself. He’s everything Nexi’s not: calm, logical, and patient. But heck, isn’t that what love is? A balance of two people that makes things work beautifully between them!

What is planned for Nexi’s character in future books?

A few things will happen with Nexi along the way. The biggest thing will be a happier Nexi in book two of the Magic & Mayhem series. Everything by the end of WEREWOLVES BE DAMNED has settled some for Nexi. She’s found a home in the Otherworld. She’s past the anger and she’s avenged her family. She’s come into acceptance of her new life, learned a few things about herself, and she’s beginning to feel like her old self again. More importantly, through the love of those around her, Nexi is emotionally healing.

So, there is Nexi Jones, a very normal and real twenty-five year old, who’s been tossed head first into mayhem. What can I say—watching her grow and find her place in this crazy supernatural world is going to be fun!

**Stacey has a huge giveaway going on for her Werewolves Be Damned Tour! The winner will be drawn May 20th on her website. You can check it out and enter HERE!**