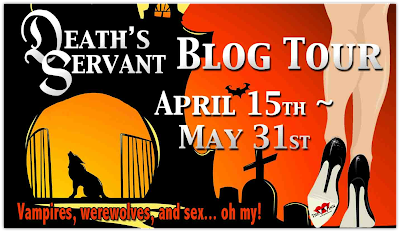 I’m happy to be hosting a stop on C.J. Ellisson’s Death’s Servant Blog Tour today. C.J. is the author of the popular paranormal romance series VV Inn and is here revealing her top ten dislikes of her favorite genre…stick around, say hi and enter the giveaway!

Thanks for having me on the blog! Here is my top ten list of “What I Dislike in My Favorite Genre” (which is Urban Fantasy).

10) Whiny Heroines. I dislike weak women in real life and don’t care to read about them in my fiction. Sure, every woman has her doubts and can grow within a story, but a truly weak character who acts Too Stupid To Live, makes me want to throw the book out.

9) Predictable Endings. If we can guess what is going to happen about ¼ of the way through the book then maybe the plot should be changed. Just saying.

8) Excessive romance in my adventure stories. I’m not talking about the sex, that part is great. But if the urban fantasy I’m reading revolves mostly around the sexual tension and growing relationship between the Hero and heroine I get a little annoyed. I know there is a huge cross over of readers from paranormal romance to urban fantasy, but I really prefer the relationship building aspects to be a sub-plot rather than a main pot thread.

7) Really dumb choices by the MCs. Sometimes bad choices seem overly contrived and convenient. Am I the only one who feels this way?

6) Meandering writing. Dude, pick a style and stick with it. Most readers I talk to prefer action and dialogue heavy stories. If I have to read extended descriptions of clothing and hair I get bored and skip pages.

5) Kick ass chick, bad love life. This is similar to #8, but not exactly the same. Why are there so many stories where the heroine saves the world, kills the bad guys, and invariably always messes up her love life? Why do authors think they have to emotionally torture a character for us to enjoy the book?

4) Love triangles. Pick one guy already. Who is ever in that position in real life for months on end? Maybe we flirt with two while we’re looking, but months of a love triangle grates on my nerves. And, OMG, enough with the over the top alpha males already. If I want to smack them in the book, then I bet someone else does, too.

3) Inconsistent “facts” for a plot convenience. As an example, let’s say the character reacts badly near electronics, causing the gadget to malfunction, but then at one point in the story that problem magically disappears or only crops up when the hero/ine really needs that gadget to work.

2) Young, physically perfect heroines. Does life stop after turning 30? Did we all magically stop buying books after age 30? Where are the divorced, single mom, and slightly-thickening heroines? Life is hard and I’d like my fictional characters to have to actually live it a little.

1) Formulaic stories. Spin us a spellbinding tale, write outside of the box, read voraciously so you know what has been done and you don’t repeat it. Avid readers will recognize repetitive pot lines and cardboard characters. And we don’t enjoy them.

What about all of you? What do you dislike seeing in your favorite stories?

Jonathan Winchester has clashed with his alpha one too many times. After another argument he leaves the Manitoba pack, his only home since the werewolf attack that changed his life. He returns to his home state of Virginia to start a new life free of pack politics. Jon finds work and meets a young waitress, Raine, who appears to be a lone werewolf, too.

As their relationship progresses, Jon’s embroiled in more intrigue than he bargained for and a danger bigger than he can handle. He’s running scared until his own alpha tendencies surface, making him unable to leave the pretty werewolf’s problems behind. The young man is desperate to save Raine—even if his efforts may lead him straight to death.

Journey along in this first prequel novel involving the favorite characters from the bestselling V V Inn series. Written at reader demand, this stand-alone story explains how the beloved Jonathan came to serve the deadly redheaded vampire, Dria.

Chapter One
“Jon!” Romeo’s deep voice follows as I stride quickly down the hall. “Get back here.”
I round the top of the stairs and descend at full speed, skipping steps in my haste to leave. Anger pulses like a living beast beneath my skin. If I don’t get the hell out of here, my alpha and I will come to blows.
The urge to fight, to answer the call of my inner wolf, colors my vision, tinting the werewolf pack’s large home in a wash of red haze. Claws itch to descend through my clenched fists, and the brush of fur waiting to erupt tingles my skin.
“This is not over.” Romeo’s booming shout thunders through the house. “Get back here now, or don’t ever come back!”
This time he’s getting what he threatens. What’s so crazy about suggesting a support network for wolves? Why am I suddenly the object of scorn and ridicule? Is organizing packs somehow a threatening concept to our way of life?
A tiny voice inside whispers, Your suggestion of such a change goes against everything a werewolf pack stands for.
Could that be true? Would instilling communication among hundreds of Weres hurt us as a species?
I block the denials I’ve heard for months. Doesn’t make sense. Could Romeo’s resistance stem from something bigger? Should I listen to the gossip saying I’ve evolved into an alpha faster than anyone expected? There is only one male alpha per pack, not two; one mated pair deciding the fate of their wolves, and those who don’t agree must leave. Or fight for supremacy.
I barrel out the front door and sprint toward the detached garage, where a few of the single wolves have bedrooms in the space above the cars. I throw open the door, the heavy steel bouncing off the siding in my unchecked rage. I need to talk to Lori, my werewolf girlfriend in the pack. I’m ready to leave and want her with me.
My inner beast gnashes its teeth, ready for a challenge, eager to return and face the man who saved my life less than a year ago. Tamping down the temptation, I rush the inner stairs three at a time. The scent of half a dozen wolves lies heavy in the confined space, confusing the rational part of my mind struggling to remain in control.
I recall our past in an effort to still my raging desires—I owe this man my life. Romeo found me lost and afraid when I awoke in the hospital, uncertain of what I’d become. Elsa, his wife, sensed immediately I was different, discouraging her mate to allow me into their pack.  Romeo didn’t care. He recognized me for what I truly was—a scared college kid who didn’t know what the fuck happened to his well-ordered life.
When I reach the upper hall, I’m jolted out of my calming reverie by sounds of passion. I smile, wondering who Kotsana has lured to his waterbed now.
“That’s it, baby,” a familiar female voice coos softly. “You know I like it good and deep.”
The instant anger near the surface of my mind threatens to overwhelm me. I stop cold—leaning a hand on the wall, gasping to catch my breath—while my packmate screws my girlfriend beyond his shut bedroom door. 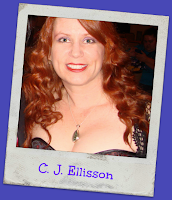 C.J. Ellisson is the USA Today Bestselling author of the NYT Bestselling book, Vanilla on Top, the bestselling V V Inn series, and several erotica shorts. She lives in northern Virginia with her husband, two children, two dogs, and a fluffy black cat who makes her sneeze. Unlike most full-time authors, she’s also battling severe chronic illness. C.J. works daily to put her Lupus into remission and continues to fight numerous bacterial infections while her immune system slowly attacks her body. She turned to writing when she could no longer work outside the home and claims the escape of penning contemporary fantasy, erotica, and erotic romance has helped save her sanity. 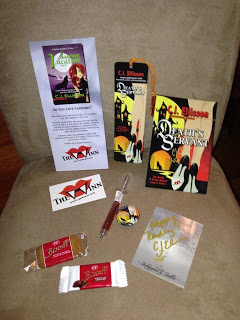