I’d like to welcome author Poppy Dennison to the blog today! Poppy is celebrating her latest release, Born this Way, a steamy M/M Paranormal Romance with a forbidden romance and lion shifters. Do I have your attention? Well, let’s not waste any time and see what Ms. Dennison has to say!

“Mate Me or Date Me!”
By Poppy Dennison
True confession time: I love the fated mates trope. Seriously love it. How cool would it be to just *know* that the one you love is the person fate meant for you to be with? It sure would make dating a lot simpler…or would it?
In Born This Way, my new novella from Dreamspinner Press, I wanted to explore the trope a bit. What happens when a shifter knows his mate, but his mate is oh-so-human and doesn’t have the advantage of super senses?
I really wanted to play with that idea. The more I thought about it, the funnier it became. I could just picture the human character being very “hold up, wait a minute” when the shifter character became growly and “MINE”.
Here’s the scene that the idea inspired. It became the opening of the novella, and it makes me laugh every time I think about it!
Hart began taking slow steps backward and pulled Dayton along with him. He began a purring rumble in his chest that sent shivers down Dayton’s spine. The good kind of shivers. Except not. Because this was his best friend’s brother, and he shouldn’t be having good tingles where Hart was concerned.
“Hart? Um, not sure what you’re doing here.”
Hart nuzzled his nose into Dayton’s hair. “Don’t like you smelling like them. Never have.”
Wait. What? Dayton’s mind floundered. “Wait. What?”
“Need to get rid of their smell. Want you to smell like me.”
“Oh no, buddy. Don’t know what you’re doing here. Are you in heat or something? ’Cause if you’re in heat and smelling all that lionessy goodness on me, then we need to have a long talk. Preferably over the phone. Maybe next week.”
Hart growled. “No.”
“Oh come on, big guy. Your sister wanted me to stop by, so I did. But you doing this whole growly-sniffy thing is not making me want to come back. Ever.”
“You’re mine.”
“Um, no. Actually, I’m not. I’m mine. What’s with you guys and the whole ownership gig? I swear, Tawny tries the same thing. Remember that time when that kid pushed me down on the playground? Yeah. You’re acting like that. And that wasn’t fun either. I spent the next twenty years convincing people I didn’t need a girl to beat up the bullies for me.”
Dayton stumbled over the corner of a rug. White. Who had a white rug? In their bedroom? Furry white rugs? Seriously? Hart needed a new decorator.
“Been wanting you for so long. Can’t wait any longer. Have to get you away from them.”
Okay. Weird. “Listen, Hart. Come on, cut it out. And why are we in your bathroom? Which is all white and seriously, did you pay someone to do this? All white except for black towels? Who the hell has black towels?”
Hart released Dayton, who immediately spun around to try and rationalize with him.
Hart began unfastening the sling holding Dayton’s arm in place. “Whoa. Whoa. Whoa. What are you doing?”
“Taking this off. Taking it all off.”
*** 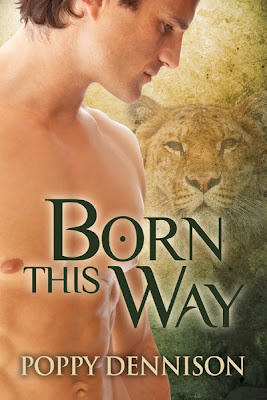 Dayton Whitmore injures his arm playing basketball with his lion-shifter friends, and his best friend asks Dayton to check on her estranged brother Hart while he’s in Atlanta visiting a specialist. Though Dayton and Hart were never close, he grudgingly agrees.

Banishment from his pride meant Hart Sherman could never see his family again. His liger heritage—a tiger mother and lion father—was a thorn in his alpha father’s side. He always planned to go back for Dayton, the man he knows is his mate, but he uses his career as an entertainment attorney as an excuse to avoid risking Dayton’s rejection. When Dayton shows up unannounced on his doorstep, Hart wants nothing more than to claim him.

Knowing what it means to be a lion’s mate, Dayton isn’t in any hurry to make a lifetime commitment. To convince Dayton he’s serious, Hart must come to terms with the circumstances of his birth—and find a place in the pride for them both. 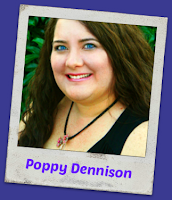 A sassy southern lady, Poppy Dennison developed an obsession with things that go bump in the night in her early years after a barn door flew off its hinges and nearly squashed her. Convinced it was a ghost trying to get her attention, she started looking for other strange and mysterious happenings around her. Not satisfied with what she found, Poppy has traveled to Greece, Malaysia and England to find inspiration for the burly bears and silver foxes that melt her butter. Her love of paranormal continues to flourish nearly thirty years later, and she writes steamy love stories about the very things that used to keep her up all night. If her childhood ghost is lucky, maybe one day she’ll give him his own happily ever after.