Today I’m hosting a stop on the Seven Years Blog Tour, brought to you by Enchantress of Books Blog Tours. Author Dannika Dark is sharing a few reasons to love her hero, an excerpt of Seven Years and yes, there’s also giveaway! Happy Monday 🙂

2. Austin is a man with a heart who values family. But put your finger on someone he cares about and you’ll have a date with his fist and the concrete, if you’re lucky.

3. Tattoos. I’m just throwing it out there, but men with tattoos are hot.

4. He knows what he wants, but also believes in doing the right thing. He’s not reckless and indifferent to the feelings of others. He’s a man who does what’s best for the pack, no matter how tough it may be. 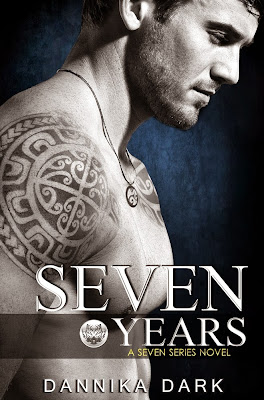 It’s been seven years since Lexi Knight lost her brother in a tragic accident. On the anniversary of his death, her brother’s best friend shows up unexpectedly – a man she hasn’t seen since the funeral. He is no longer the boy Lexi once knew, but a dangerous-looking man with tattoos and dark secrets. He broke her trust and abandoned her family, yet what he reveals makes it impossible to stay angry. Lexi has been secretly infatuated with Austin since childhood, so finding out he’s a Shifter just makes him sexier. Dammit.

Austin Cole has returned to the city where he grew up, and just in time. He’s lived a hard life these past seven years, and the shadows of his past are threatening to destroy Lexi’s family. It’s time that she learned the truth about her brother, but there is a shocking twist that Austin never saw coming. Now he must protect her family when her mother and sister wind up in mortal danger. Will Lexi learn to accept the truth about who he is, and can Austin salvage a relationship from the ruins of their past?

Excerpt
The closer I snuggled up to Austin, the more I craved that cozy familiarity—more than I would have cared to admit. I’d missed him. How do you not miss someone who was a huge chunk of your childhood and young-adult life who disappeared off the face of the earth? Almost every memory I had from kindergarten to age twenty involved Austin Cole.
The next thing I knew, my cheek rested on his bicep and I tucked my body against his like a puzzle piece.
Just when I closed my heavy eyelids, he groaned.
Oh God, please don’t let him wake up now.
It was deep and guttural, and he shifted on his right side, facing me.
“You okay?” he murmured.
I didn’t reply. I played dead and pretended I was asleep. It seemed like a good plan to avoid the embarrassment of explaining why I was latched on to him like a man-sucking leech.
A rough, warm hand cupped my cheek and I felt him scoot down a little. Maybe he thought I had fallen asleep, because his thumb brushed over my right eyelid softly.
Five times. I counted.
When his lips lightly touched mine, my brain just shut down. It was a soft, almost nonexistent kiss, but I felt it all the way down to my toes. Then it zinged back up to my hips and damn if I didn’t moan.
Now we were both aware I wasn’t asleep and he was kissing me. But it didn’t stop. His kiss pressed a little bit harder and tingles roared through my body, and my breath was shaky and erratic.
When his tongue touched my lip, I quickly opened my mouth and kissed him back.
Hard.
Deep.
Kissed him like I’d fantasized about doing for the last seven years.