Today I’m hosting a stop for one of my fave indie authors Felicity Heaton on the Kissed by a Dark Prince Blog Tour via Rabid PR Tours. This is the first book in a new series and features fae, vampires and plenty of other sexy supernaturals! Check out Felicity’s post and be sure to enter the giveaway!

“Top 10 reasons why the dark elves of the Eternal Mates series are sexy as hell!”

It’s great to be here at Romancing the Dark Side today as part of the Kissed by a Dark Prince Book Tour celebrating the release of the first book in my new Eternal Mates series of paranormal romance novels.

Today, I’m going to be counting down the top 10 reasons why my take on dark elves in my Eternal Mates series are sexy as hell and deserve to be paranormal romance heroes (and heroines).

But before we get to the main event, I want to introduce myself. I’m a British paranormal romance author and a USA Today best-seller. I have been writing since 2005, and went indie in 2006. I love to write big worlds, populated by vampires, shifters, demons, fae and angels, and I have several series. This tour is about the Eternal Mates series, which is actually a spin-off from my Vampire Erotic Theatre series. That series focused on a family of vampires at one theatre in London but it had glimpses into the wider world outside the theatre. It’s that world of fae, dark elves, demons, witches, shifters, and other incredible species that the Eternal Mates focuses on.

Now, on with the show…

10. They live in Hell
Any immortal species not only capable of living in the forbidding terrain of Hell but able to turn a black land into a verdant kingdom and hold the respect (and fear) of many of the other species resident in that dark realm deserves to be on the list of eligible paranormal romance heroes.

9. They are the progenitors of vampires
Millennia ago, elves corrupted by the darkness in our world turned into something evil and tainted. That taint on their souls stole most of their powers and cursed them to the shadows. Over centuries, those corrupted elves spawned what would become vampires. The vampires who know about their ancestry tend to bear a grudge against the elves because they don’t have the powers of their forefathers. They cannot walk in the sun, cannot eat food, and have lost their psychic abilities. In return, the elves despise the vampires because they are a constant reminder of what could become of them if they surrendered to the darkness within.

8. They are tied to both the light and to the darkness
The dark elves have a connection to the earth and nature, able to sense things about it and feel its wrath when it is harmed because of them. This connection to nature is the light in their souls that holds back the shadows of darkness that constantly threaten to wrap black tendrils around their hearts and consume them if they don’t watch their step and abide by the rules of their kind. It’s easy for them to lose this balance within themselves and risk becoming like the vampires they spawned, and many elves lose themselves to the darkness.

7. Among them are warriors able to give any immortal species a run for their money
Skilled with blades, spear, bow and their own natural powers, the dark elves of the Eternal Mates series are warriors capable of dealing with the mightiest of foes. Their warriors are trained from a young age to fight demons, shifters, witches, and even gods and goddesses, and to use their intelligence and powers against their enemies. The warrior class of the elves don’t hold back in battles. They are fearless and will follow their leaders without question, and have honed their skills, combining teleporting, telekinetic and physical attacks to quickly dispatch their foes.

6. They can teleport
The dark elves possess not only the ability to teleport themselves via the portals between our world and theirs, and around Hell, but they can also teleport anything they own. No matter how far they are from that object, if they own it, they can bring it to them or send it away to a specific location. They are more than happy to use teleporting to their advantage, increasing their natural speed in fights and making them unpredictable and difficult to defeat.

5. They have psychic abilities
Together with their ability to teleport, the elves also possess psychic powers, most notably telekinesis and the ability to control both their armour and their weapons with their minds. They can easily transform a black sword into a spear or split one sword into two.

4. They have the hottest armour you’ve ever seen
This is definitely up there in the top reasons my dark elves are hotter than Hell on a summer’s day. Just ask someone who has read Kissed by a Dark Prince, the first book in the series. The armour these guys wear has caught the attention of countless readers. Why? Well, not only is it contained in twin metal bands the elves wear around their wrists, but they use a mental command to control it. When they want it out, it appears in the form of black scales that sweep over their bodies and hugs them like a second skin, revealing pretty much everything about its owner. Yes, elves like to be nude beneath their armour and this might just add a little spice to that armour’s sexiness. The elves can control their armour too, meaning it can cover them from neck to toe, or they can hold it at their waist so it only covers their legs. It also transforms their fingers into serrated black claws, and forms their helmet too. The standard helmet flares back above the nose, sweeps over the top of the head and forms twin dragon-like horns. It also has slats that come down from the cheeks to form a mask over the lower half of their faces, leaving only a V for their eyes. Not only that, but the metal the armour is made from is tough and only the same material can penetrate it.

3. They are both beautiful and deadly
The dark elves are tall, with all grown males standing above six-feet-four and all females above six-feet, and are ethereally beautiful, but the darkness inside them often shines through. Tempers easily flare, and when they do, an elf can look vastly different. Rather than having softly pointed ears and normal teeth, their ears grow pointier and flare back against the sides of their head, often tangling in their black-blue hair, and their canines sharpen, forming fangs. Their purple eyes will flash brightly in warning and if that doesn’t convince whoever has pissed them off to keep their distance, they will hiss before attacking. When they are in control, they can alter their appearance to fit into our world, losing the pointed tips of their ears and adopting a mortal eye colour. That eye colour varies from elf to elf, but can quickly switch back to purple if they lose their temper.

2. They can drink blood to heal or to gain abilities
A power lost by the vampire offspring of elves is the ability to temporarily gain the abilities of a non-human blood host by taking a small dose from them. This is dangerous for the elf and never done on a whim. The blood they take might have abilities that negate their ones, rendering them vulnerable. Drinking a blood host to death isn’t condoned because to do so means the elf takes on those powers permanently and risks awakening their dormant darker side. Elves also drink blood to heal when they are severely injured, and tend to seek out mortals in those situations, luring them away from prying eyes and using their psychic abilities to give the mortal pleasure while they feed.

1. Once they meet their fated mate, they will stop at nothing to claim them
Elves can fall in love with anyone but nothing quite beats the connection, pleasure and love they can experience with their eternal mate. Elf males who find their ki’ara, or fated female, become extremely possessive, unpredictable and territorial until they have claimed their woman, exchanging blood with her and gifting her with immortality. Elves will fight any male who is a perceived threat to them or viewed as competition for their ki’ara’s attentions. The desire to claim their female is fierce and relentless, often seizing control of them and forcing them to exert monumental effort to regain that control. They are also extremely protective, tender and affectionate towards their mate, willing to do anything to please her and satisfy her every whim. They will fight to the death for the woman who has claimed their heart and will stop at nothing to win her heart in return.

Now… don’t you think these dark elves deserve to be paranormal romance heroes?

Be sure to follow this fantastic tour to learn more about the passionate heroes and sassy heroines in the Eternal Mates romance series! You can also find yourself in with a chance to WIN a $50 or $25 Amazon Gift Certificate if you follow the tour. More details, including how to enter and a full list of stops, are available at the Kissed by a Dark Prince Virtual Book Tour page: http://www.felicityheaton.co.uk/kissedbyadarkprince-book-tour.php

Kissed by a Dark Prince is available from Amazon Kindle, Kobo Books, Barnes and Noble Nook, Apple iBooks stores and other retailers. Also available in paperback. Find the links to your preferred retailer and a downloadable 6 chapter excerpt at: http://www.felicityheaton.co.uk/kbadp 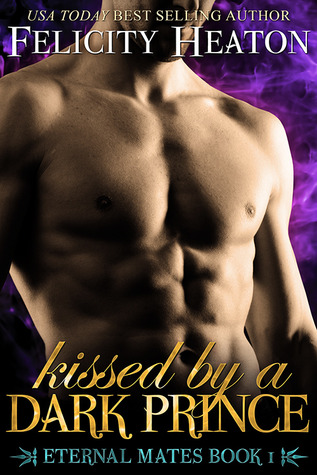 Olivia thinks it’s her lucky night when a dangerously handsome unconscious fae ends up on her inspection table. He’s her chance to redeem herself with her employer, the demon-hunting organisation, Archangel. But when the tall, dark and deadly immortal warrior awakes, she gets much more than she bargained for…

Attacked by his enemy in the elf kingdom, the last thing Prince Loren expects when he comes around is a beautiful angel watching over him and medical technology of the mortal realm. Hazy from his injuries, all he can focus on is the pulse ticking in her throat and the sweet allure of her blood.

One single bite reveals she is his eternal mate, triggering a bond between them that will leave him weakened until it is complete… or broken, and pulling Olivia into the crossfire of his ancient feud.

To protect his people and his mate from the machinations of a madman, Loren must risk everything by working with Olivia at Archangel to find a way to break the bond blossoming between them.

But will Loren be strong enough to place duty before desire and give up the one thing he has waited millennia for and craves above all others—his eternal mate? And will Olivia be able to resist the incredible heat that burns between them and the temptation of her dark prince’s kiss?

Giveaway provided by author.
Felicity is giving away one (1) ebook from her backlist (older books) to one lucky winner!
a Rafflecopter giveaway