Posted 6 January, 2014 by Lori @ Romancing the Dark Side in Giveaways, Guest Posts / 18 Comments

I’m super excited to have the fabulous Delilah S. Dawson on the blog today, celebrating her latest edition to the Blud series: The Damsel and the Daggerman. Delilah is giving us a sneak peek into the heroine’s world and three lucky winners will get their own copy of this new release so be sure to show her some love in the comments! Happy Release Day!

“The Damsel and the Daggerman: Young Jacinda’s World”
by Delilah S. Dawson

Once upon a time, there was an unruly London girl named Jacinda with hair the color of a bludfox pelt who spent all her free time in her absent father’s library, making notes on his maps and drawing lines on his globe. The parts that said Here They Be Monsters were circled several times. When she took her schoolmarm’s pointer and explained rather emphatically that they’d been calling it Constantinoble for oodles of years now and Byzantilium wasn’t even real, a note was sent home regarding how finishing school might be a better place for her. While most girls at sixteen would’ve been distraught and terrified to leave London for MacSweetie’s School for Ladies, Jacinda was thrilled. Finally, she would have her first adventure. The fact that she wouldn’t be the only ginger in Scotland didn’t hurt, either.

She was hooked on travel from the first breath of fresh air outside London’s high walls. The moors were beautiful in their endless, rippling fashion, and the bludrabbits were adorable, so long as she remembered to kick them instead of pet them. Her twitchy Aunt Muriel rushed her onto the train and immediately huddled behind a wall of knitting as a good chaperone should, leaving Jacinda to wander the train cars and watch the scenery go by. She took detailed notes in her journal regarding the landscapes, walled cities, smaller towns, and a particular traveling caravan train they passed near Manchester. Of course, her daydreams were of warm, sandy places like Karo and Arabia, but Scotland was a decent start, provided she got to see at least one water horse while she was there. The highlight of the train journey was meeting her first Bludman, a slender girl just a little older than herself dressed in the required all black and smiling carefully without showing her fangs.

“Where are you going?” Jacinda asked her, bobbing a curtsy as they passed, and the girl fidgeted in her red gloves.

“To the dining cart for blood,” she answered.

“No, I meant… on the train.” It was clear the girl was deeply uncomfortable, but Jacinda wasn’t ready to let her go without an interview and firmly blocked the aisle with an open smile, waiting for the girl to answer.

“To Glasgow to work as a seamstress.”

A gloved hand landed on Jacinda’s shoulder, an older gentleman with a walrus mustache. “Miss, is this… thing… bothering you?”

Jacinda wrenched away and spun on the man. “How dare you, sir? I am no thing.”

The man spluttered and coughed, and his monocle fell down to bounce against his waistcoat. “I meant, of course, the Bludman. Are you harmed, young lady? Has she attempted to bite you, perhaps to lure you into a hidden place?”

At that, the Blud girl blushed red, spun around, and hurried from the car, narrow shoulders shaking with sobs.

“I hope Scotland is less bigoted than Sangland,” Jacinda muttered, pushing past the man to return to her aunt’s myopic company.

Late that night, Jacinda searched for the girl as she disembarked but saw no sign of the telltale black outside the train station. Her aunt steered her through the crowd and to a carriage, her frightened fingers pressing bruises into Jacinda’s shoulder.

“Almost there. One more stretch. Sleep if you can. Keep your limbs inside the coach. And don’t touch the bludpony, you ninnyhammer!”

Jacinda whipped her arm back as the fat white pony swung its thick neck around and bumped her, hard, with the metal cap over its muzzle. In London, the bludmares were huge things, but here, the streets were narrower, and the ponies were sized to match but heavily muscled for pulling the carts up twisting lanes. The red eyes were the same, though, as was the bloody foam dripping from its muzzle cap. Jacinda settled for patting the bloodthirsty thing’s rump, quick, before ascending the carriage.

She slept as the coach rattled through the highlands, toward MacSweetie’s. Only when the bludpony screamed a challenge did she blink awake and shove the curtain aside to look out. The dawn lit a hobbletypodge castle of dark gray stone with turrets and ramparts and all sorts of secret places to discover. The carriage was stopped on a turnaround outside the gates, the pony jigging as Jacinda stepped down to stand beside her aunt in the lavender shadows. Perhaps a different girl would’ve shrunken down or plucked at the tartan skirt or hunter green jacket of her MacSweetie’s uniform. But not Jacinda. She breathed in deep, sucking in the sweetness of heather and the tang of cold stone and holding her chin high.

“Good morning, ladies. This must be Jacinda.”

She had expected a haughty headmistress, a skeletal old woman with thin fish lips turned down like a marionette’s. But the first person she met at MacSweeties was a dapper young man dressed all in browns with wavy golden hair, ice blue eyes, and a lion’s grin. He opened the gate with a skeleton key on his watch chain and held the door wide open, bowing as Aunt Muriel passed but looking up to wink at Jacinda.

“Welcome to MacSweetie’s. I’m Liam Harville, instructor of geography, astronomy, and history as well as part-time groundskeeper. Now, if you’ll follow me, I’ll conduct you to Mrs. MacSweetie, our headmistress. You’ll most likely be kept waiting in her office until she’s done with her porridge and tea, but at least it’s warmer inside and there are no bludbunnies waiting to nibble your toes.”

After relocking the gate, he led them through the tunnel and into the castle’s keep, which had been turned into an exercise yard with a cricket pitch and croquet field.

Liam, or Mr. Harville, as she must call him, raised an eyebrow at her as he held open a tall wood door. “Are you not frightened of being eaten, Jacinda?”

She stepped into the warmth of the castle, anxious to get rid of Aunt Muriel and start exploring her new home.

“Not at all, Mr. Harville. What truly frightens me is being bored to death.”

Little did Mr. Harville know what his new student had planned for him, but boredom was never an option.

Delilah S. Dawson comes from a long line of Roswell, GA natives. WICKED AS THEY COME is the first in her Blud series for Pocket/S&S, and a creepy paranormal YA, SERVANTS OF THE STORM, will be out with Simon Pulse in 2014. Her next YA, DELINQUENT, will be out in 2015. She is also an Associate Editor at www.CoolMomPicks.com and www.CoolMomTech.com, where she is given the more eccentric and geeky products to cover. Delilah lives with her husband, two small children, a horse, a dog, and two cats in Atlanta. 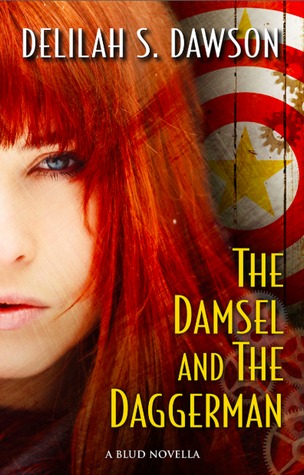 Bad boy knife-thrower Marco Taresque is the hottest and most dangerous performer in the caravan. He keeps to himself until a pesky female journalist arrives, anxious to interview him about his checkered past—his last assistant disappeared under mysterious and bloody circumstances, earning him the nickname “The Deadly Daggerman.”

Unsinkable journalist and adventurer Jacinda Harville doesn’t take no for an answer, and she’s determined to wear down Marco no matter how threatening—or incredibly desirable—he might appear. He agrees to an interview—but only if she’ll let him strap her to a spinning table and throw knives at her body. How can she say no? And how can she resist him when he leans close for a kiss that strikes her more sharply than any blade? It’s the first time she’s let a man get the better of her, and she’s determined it will be the last…

Just when she thinks she can’t take any more of his games, Jacinda receives a note from Marco saying he’s finally ready to tell her the truth about what happened to his missing assistant. She sets out for an address miles away, but what she finds there turns the tables on everything she thought she knew about the tender lover who wears a smile as sharp as his knives.

As secrets are unraveled and passions take hold, Ginger realizes her hard heart has melted. But will it be too late to save Marco—and herself—from the daggerman’s dangerous past?

18 Responses to “{Guest Post & Giveaway} The Damsel and the Daggerman by Delilah S. Dawson”