Posted 10 April, 2014 by Lori @ Romancing the Dark Side in Book Spotlight, Giveaways / 21 Comments

Urban Fantasy author Anton Strout is pleased to announce the third and final installment of his Spellmason Chronicles, INCARNATE, coming to readers’ bookshelves and e-readers on September 30th from Penguin/Ace Books. Like the two previous books in the series, ALCHEMYSTIC and STONECAST, the book will focus on spellmason Alexandra Belarus, who has the ability to give stone life-like qualities, and Stanis, the centuries-old gargoyle who has sworn to protect her. At the end of STONECAST, readers were left at a point of high tension with lots of questions still unanswered. INCARNATE promises to deliver answers by way of a fast-paced adventure with all the action and snarky humor Strout’s fans have grown to love. When Alexandra Belarus discovered her family’s secret ability to breathe life into stone, she uncovered an entire world of magic hidden within New York City—a world she has accidentally thrown into chaos. A spell gone awry has set thousands of gargoyles loose upon Manhattan, and it’s up to Lexi and her faithful protector, Stanis, to put things right.

But the stress of saving the city is casting a pall over Lexi and Stanis’s relationship, driving them to work separately to solve the problem. As Stanis struggles to unite the gargoyle population, Lexi forges unlikely alliances with witches, alchemists and New York’s Finest to quell an unsettling uprising led by an ancient and deadly foe long thought vanquished.

To save her city, Lexi must wield more power than ever before with the added hope of recovering a mysterious artifact that could change her world—and bring her closer to Stanis than she ever thought possible… 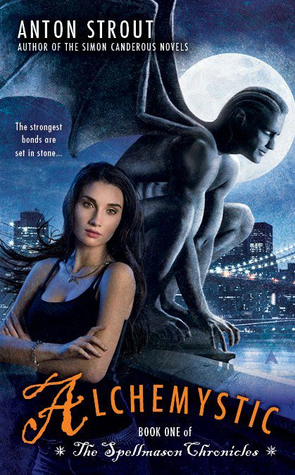 You can find the Spellmason Chronicles on Amazon.com and other online booksellers.

Born in the Berkshire Hills, Strout currently lives in the haunted corn maze that is New Jersey (where nothing paranormal ever really happens, he assures you). He's the author of the Simon Canderous urban fantasy series and the Spellmason Chronicles, both for Ace Books, as well as many short tales published in anthologies by DAW Books.

In his scant spare time, Strout is a sometimes actor, sometimes musician, occasional RPGer, and the world's most casual and controller smashing video gamer. He currently works in the exciting world of publishing, which he assures is as glamorous as it sounds.

Giveaway provided by author.
One lucky reader will win a copy of ALCHEMYSTIC by Anton Strout
a Rafflecopter giveaway